As we have seen previously in this blog, the charts, graphs and marketing data supplied by Amsoil, Inc., the Amsoil Absolute Efficiency Oil Filter is compelling, but how does it really perform in a real world environment? And is there any data or tests independent of Amsoil that support their claims? Read on and be the judge!

Introduction: The late George Morrison, was a Certified Lubrication Specialist by the Society of Trobologists and Lubrication Engineers as well as the founder and CEO of AV Lubricants, one of the largest Exxon/Mobil distributors in the United States. During his 35 years in the lubricant industry, He worked with such industries as Aviation and Coal Mining assisting with their specific lubricant needs in which hundreds of Used Oil Analysis reports went through his hands a week. As a result, Mr. Morrison was an expert in lubricant and lubricant filtration.

While the accomplishments of his career are highly notable, his enthusiasm and devotion to the lubricants industry was further demonstrated through his regular posts at a popular motor oil forum, Bob Is The Oil Guy. There, Mr. Morrison supplied valuable motor oil and filter information most of which were based off of his personal experience and testing.

Seem to good to be true? Below, the in depth analysis of Mr. Morrison’s oil filter test.

Laboratory tests were conducted on the used oil samples taken from Mr. Morrison’s Sequoia via spectrographic as well as particle count through both laser and pore blockage methods. 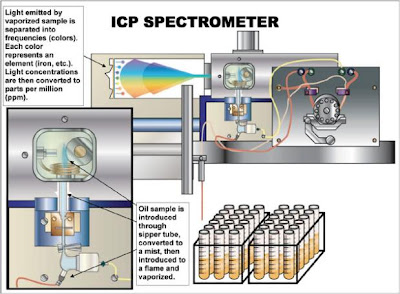 Elemental Analysis by ICP (inductively-coupled plasma) detects up to 24 metals, measuring less than 5μ in size, that can be present in used oil due to wear, contamination or additives. Wear Metals include iron, chromium, nickel, aluminum, copper, lead, tin, cadmium, silver, titanium and vanadium. Contaminant Metals include silicon, sodium, and potassium. Multi-Source Metals include molybdenum, antimony, manganese, and lithium. Additive Metals include boron magnesium, calcium, barium, phosphorous and zinc. Elemental Analysis is instrumental in determining the type and severity of wear occurring within a unit. (Cited: Polaris Laboratories) 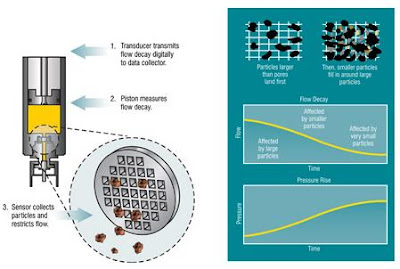 The pore blockage method is a widely used method of obtaining an automatic particle count. In this method, a volume of fluid is passed through a mesh screen with a clearly defined pore size, commonly 10 microns. There are two instrument-types that use this method. One instrument measures the flow decay across the membrane as it becomes plugged while pressure is held constant, first with particles greater than 10 microns, and later by smaller particles as the larger particles plug the screen. The second measures the rise in differential pressure across the screen while the flow rate is held constant as it becomes plugged with particles. Both instruments are tied to a software algorithm, which turns the time-dependent flow decay or pressure rise into an ISO cleanliness rating according to ISO 4406:99.

While pore block particle counters do not suffer the same problems as optical particle counters with respect to false positive caused by air, water, dark fluid, etc., they do not have the same dynamic range as an optical particle counter, and because the particle size distribution is roughly estimated, are dependent on the accuracy of the algorithm to accurately report ISO fluid cleanliness codes according to ISO 4406:99. Nevertheless, they accurately report the aggregate concentration of particulates in the oil, and in certain situations, particularly dark fluids such as diesel engine oils and other heavily contaminated oils, pore block particle counting does offer advantages. (Cited: George Morrison) 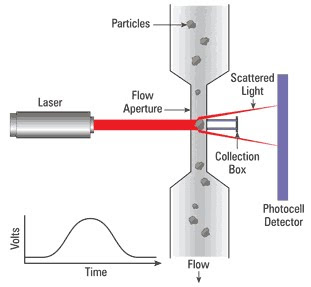 Automated light blockage particle counting technology was first introduced in the 1960s. The basic function of a light blockage APC is simple; a beam of light is projected through the sample fluid, if a particle blocks the light, it results in a measurable energy drop that is roughly the proportional to the size of the particle.
A more modern type of particle counter is the light scattering APC. As with the light blockage method, particles produce a measurable interference in the transmission of light through the sample in the light scattering cell. However, instead of simple white light, this method employs a laser. The highly focused light emitted is interrupted by a particle, producing a scattering effect. The increase in energy across the sampling area is measured with this type of particle counter, just the opposite of the light blockage method. (Cited: Noria)

1) 1/17/07: At 155,876 total vehicle miles (10,000-miles on oil/filter), got spectrographic and Pore Blockage base line of Toyota Oil filter and Mobil 1 oil. Then changed oil and oil filter. The ISO cleanliness for this base line reading was 20/19/17 , a level consistent with previous ISO readings for the oil and filter at the 10k Oil Change interval as noted by Mr. Morrison.

2) 2/5/07: At 157,550 total vehicle miles (1,574-miles on oil/filter), got second spectrographic and Pore Blockage result of Toyota Oil filter and Mobil 1 oil. Then changed the oil filter only from the Toyota to the Amsoil. The ISO cleanliness level for the second reading with OEM filter was 18/17/15.

4) 2/28/07: The third spectrographic and Pore Blockage results were so good that the sample was retested with a Laser Particle Count to verify the initial test results. After test results were verified and both pore blockage and laser particle counts were found to be consistent with each other, the real world Amsoil EaO Oil Filter Test Results were posted on Bob Is The Oil Guy as follows:

George Morrison; a few of his comments regarding Amsoil EaO Oil Filter:

“This level of cleanliness *will* provide meaningful, long term wear reduction and attendant increase in component life” Cited: Bob Is The Oil Guy(2/28/07)

“My used engine oil is cleaner than the oil which came out of the quart bottle” Cited: Bob Is The Oil Guy(2/28/07)

“The EaO is simply the highest quality automotive filter on the market today, from my testing and experience” Cited: Bob Is The Oil Guy(3/1/07)

“I had seen Amsoils graphs, etc. but there is nothing quite like real world testing, especially when it comes to filtration. A lab test of constant flow, perfect conditions is far removed from our vibrating, pulsing, real world engines.. Again, to achieve robotic level ISO cleanliness in an engine with 160,000 miles on it… Wow……” Cited: Bob Is The Oil Guy (3/4/07)

“The last AC Gold I cut open had a cellulose/glass blend, same as the Mobil 1 medium…… That is the only medium I have seen produced for mass sale: no full synthetics, as in the Amsoil EaO, to the best of my knowledge and cut filters too numerous to mention! 🙂 And yes, had run particle counts on AC Gold and they were not in the same world as the EaO oil filter…..”Cited: Bob Is The Oil Guy (3/6/07)

“Yes, I did test the EaO oil filter under varying pressure conditions: on my Toyota Sequoia used oil analysis/particle count which I published the results on this thread some months ago. The EaO turned in “real world” filtration performance (not laboratory constant flow) to a level of cleanliness cleaner than the Mobil 1 coming out of the bottle!!

And I would also agree that the Amsoil EaO, Mobil 1 and Pure One are superb filters with the EaO superior in every performance aspect simply due to its 100% microglass medium construction vs. the glass/cellulose blend used in the Mobil 1 and Pure 1 filters.” Cited: Bob Is The Oil Guy (2/28/08)

“The major component was the extraordinary filtering capabilities of the Amsoil EaO filter vs. “the rest”.. For those of us who indeed understand the long term life extension of incredibly clean engine oil, the use of the EaO is of great value.. When I can use an oil filter which provides cleaner used engine oil than the oil coming out of the bottle AND understand the premise that the #1 cause of mechanical wear are dirt/particulates carried in the oil, it is your essential “no brainer”.. That coupled with significant engine oil drain interval extension is a win/win..

And then, to each his own.. The information was presented was for someone to make the informed decision of whether to go orange or utilize the highest level of filtration..”Cited: Bob Is The Oil Guy(4/28/08)